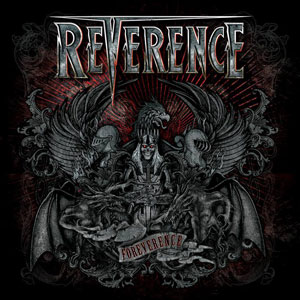 Two years have passed since I reviewed Reverence’s last full length ‘Gods of War’. A lot has happened since then. For starters, they have a new singer. Secondly, last year they suffered the loss of their guitarist Peter Rossi, who died unexpectedly in March 2017. This EP is dedicated to his memory. It also features two live songs acting as preview to their new live album.

From the musical perspective, this EP essentially picks up from where their last full length left off. You’ve got your uplifting, guitar-driven power metal hit – Firelord which, though a little cheesy in the lyrical department, is rather enjoyable. Then there’s New Order which features some old school thrash metal and even groove elements in the guitar structure. Speaking of guitars, the band’s official tribute to their recently departed guitarist Final Flight – RIP PJR is a true masterpiece in guitar work. No vocals or drums, just full on guitar solo harmony and riffs galore. I’m sure that any current or aspiring guitarist would love to have a go at playing this tune.

Then there’s the sombre, slow acoustic ballad Sleep in which you can really hear the emotion in the vocals. It’s a far more profound and bittersweet sound than what you might expect to hear from Reverence but it suits the mood. Finally, the live tracks seem like a fitting way to end this EP, acting as a means to show that the band will go on doing what they do best.

In summary ‘Foreverence’ is a great way for the band to pay tribute to their departed guitarist. They have paid their respects and now they are getting ready to move on and take the next step forward. All I can say is keep up the good work!

No shows booked at the moment.